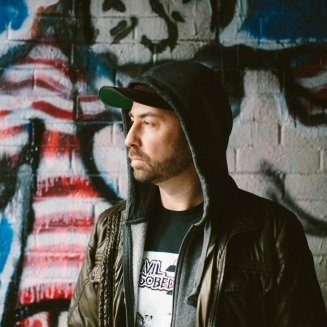 Way back at the turn of the millennium, the first album on Ghostly was from a local kid (a Florida transplant) named Tadd Mullinix and the second album was under an alias of his, Dabrye. The Dabrye project led us to crazy places like venues in Glasgow and Tokyo, and to sacred spaces like the home studio of the departed J Dilla, who Dabrye collaborated on the song “Game Over”.

Tadd arrived to me/Ghostly via our friend Todd Osborn who heard the Matthew Dear / Disco D record we did in 1999, and Tadd gave me a mixtape in 2000 (a cassette, yes) that had snippets of these sleek, strange, and wonderful hip-hop instrumentals. We didn’t have big intentions other than to get them out in the world, and when his album One/Three came out in 2001 it put Ghostly International on the map of music heads almost instantly.

Next year we’ll release the final installment (but not the last word) in Tadd’s futuristic, vast trilogy of albums (featuring a world class array of talent) and we couldn’t be happier.

We’re also offering the previous Dabrye records (including the long out of print Instrmntl) in box format, limited to 500 pieces.

Big thanks to the believers who stayed with Tadd through this all especially Jason DeMarco at Adult Swim, Michael Cina, and the Ghostly team who made this possible. Thanks to Tadd and Ghostly’s fans for supporting this art.

This is a text widget. The Text Widget allows you to add text or HTML to your sidebar. You can use a text widget to display text, links, images, HTML, or a combination of these. Edit them in the Widget section of the Customizer.